A few months ago, I set out with a few other Eswatini Climate Coalition (ECCO) members and students to stop strangers in the streets of Mbabane to talk to them about the climate crisis. In between self consciously trying not to feel a little like an evangelical tree hugger, I noticed something — Emaswati are incredibly well versed on the ‘hole’ in the ozone layer but often confuse ozone depletion for climate change.

Indeed, Eswatini has made massive progress in abiding by the landmark environmental agreement that limits the production of the substances that deplete the ozone layer — the Montreal Protocol (1987). According to the UN Development Programme, “the country moved quickly and innovatively in dealing with HCFCs.” (HCFCs are hydrochlorofluorocarbons, the gasses that diminish the protective ozone layer). Fridges and air conditioners are a major source of HCFCs. In 2017,  Eswatini impressively became the first country in Southern Africa to completely eliminate HCFCs from the manufacturing of fridges and air-cons. This has undoubtedly done Eswatini’s part in the success story that is the earth’s recovering ozone hole.

But the question remains: Does the hole in the ozone layer cause global warming?

“The ozone hole and global warming are not the same things, and neither is the main cause of the other.

The ozone hole is an area in the stratosphere above Antarctica where chlorine and bromine gases from human-produced hydrochlorofluorocarbons (HCFCs) and halons have destroyed ozone molecules.

Global warming is the rise in average global surface temperature caused primarily by the build-up of human-produced greenhouses gases, mostly carbon dioxide and methane, which trap heat in the lower levels of the atmosphere.”

Although all environmental issues are connected, it can be harmful to confuse the greenhouse effect and the hole in the ozone layer. Here are some more major differences: 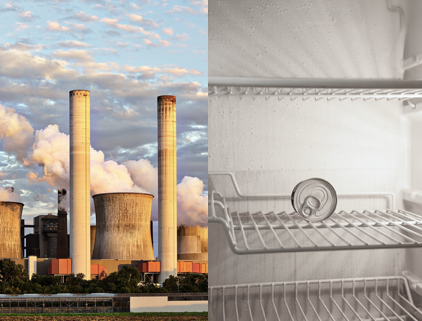 The sources of greenhouse gasses and ozone-depleting substances are both human activity but very different forms of it. Global heating is caused by burning carbon such as coal power plants (right) and the hole in the ozone layer is caused by industrial materials such as those in refrigerators (left).

Critically, ozone depletion is a largely solved environmental challenge but the climate crisis caused by global warming still requires massive and urgent action. The success of dealing with ozone depletion —both locally in Eswatini and globally — should not lull governments, companies or citizens into climate complacency by confusing the two issues. Progress on one does not, unfortunately, equate to progress on the other. Rather, the success of Eswatini phasing out of substances harmful to the ozone layer needs to be held up as a token that it is possible to deal with environmental issues if we act soon and decisively. It is time to move from ozone action to climate action.

iThere are no comments

Begin typing your search above and press return to search. Press Esc to cancel.